Funny enough, I’ve been working on this damn blog since I last posted, but I’ve had a series of delays that have prevented me from posting anything official. For one, I’ve reconnected with so many people that I haven’t been in touch with in ages—as well as some new ones—that my dance card has been pretty full these days. It’s been a great bonus that came out of creating this blog and one that I hadn’t really expected. The other reason is that it’s been like Y2K in my house. A few weeks ago when I started the blog, I noticed that my computer was running extremely slow and started crashing all the time. I was working with large size file images so I thought that may have been the reason. But one day as I was in the middle of a post, I got a pop-up saying my “disk is full.” To which I said: “Oh shit.”

I’m not terribly tech savvy when it comes to these things and I didn’t exactly know what it meant but I had an idea…and it didn’t sound good. Did I really run out of space on my computer? How did that happen? And more importantly, how much was it going to cost me??

I didn’t quite know where to turn. When I was working I could have easily picked up the phone and called one of my “guys” in the tech department and said, “Hey man, what the hell is up with my computer?” (Rule #1 of working in an office: Make friends with the tech department). But since I was no longer working I was kind of on my own. I called my one guy friend who I thought could provide some insight. “Yeah,” he confirmed, “your shit is full.”

Didn’t computers have unlimited space?? To be honest I had the wherewithal to think about this some months back so I had asked Santa for an external drive since I was taking a lot of pictures and I knew I’d probably have to think about storing them at some point. I received an Apple Time Capsule—whatever that was—from my sister. Awesome! It sat for 7 months in a box in my closet. Suddenly, I was desperate—where the heck did I put that thing? Once I found it I knew it would be the answer to all my problems! I tried bribing, pleading, then finally sulking to my friend to come over and set it up for me but somehow he decided it was time for some tough love and that I needed to read the manual and try setting it up myself. He would help if I gave it a good faith effort first.

With not much other choice, I grudgingly set aside one afternoon and went for it. I opened boxes, unwrapped equipment, pulled out book cases, plugged shit in, charged, plugged more shit in, turned on, rebooted, reworked, then remembered I didn’t know what the heck I was doing. I followed the manual as best I could but really it could have been written in Chinese for all I understood. About two hours into it my phone rings. “Hello?” It’s the super of my building. “Hi Grace. You have to move your bike.”

I had been keeping my bike in a small storage closet inside my building for the past two years. My super had offered it to me as a favor since I had given him my old bike for free and he knows my apartment is about the size of a thimble. He was very apologetic and said it was because they were starting some construction in the building and needed the space for supplies, plus the landlord was asking questions about it. I had my own key to the closet and I could come and go as I pleased. It was quite frankly a pretty excellent deal while it lasted. But now my bike was being evicted.

I hung up the phone and looked around, frustrated and on the verge of tears. There were wires, and manuals, and packaging all over the place. After several attempts the connection said, “failed.” And now the bike! Besides the damn bathtub, I didn’t know where I was going to put that thing. I was convinced the universe was trying to tell me something.

The next day I had a call with my homeopath, Debra. Yes, you heard right, I have a homeopath…I don’t have a pot to piss in, but I do have a homeopath. She was leftover from my working days when this kind of thing didn’t seem so extravagant. But really she’s wonderful and she keeps me sane. “I’m having spatial issues,” I say. She asks if I can elaborate. So I relay the story of my at-capacity computer and apartment. And as I say it out loud it occurs to me that I am describing my First World Problems. I mention that I think the universe is trying to tell me something, like “you don’t fit anymore.” Debra saw it differently: “I think it’s saying that you are growing in leaps and bounds!”

Hmm… I hadn’t thought of it that way, but I liked the sound of it. And once I got used to the idea, it seemed to make sense. I have been growing and these were just growing pains of the kind I wasn’t used to. It was no longer about big things like making money and climbing the corporate ladder, it was about making space and investing in the things I care about and the things that fulfill me. My blog has got me writing, which is something I talked about endlessly but never really did: I was a writer who didn’t write. And the bike has got me moving. Whereas before it mostly sat in a utility closet collecting dust, it’s now a big eyesore that is hard to ignore in my tiny living room. However, there’s no need to move a bucket, mop, and ladder to get to it, or haul it up steps anymore. I can actually use it now instead of having it take up space elsewhere and for no good reason. 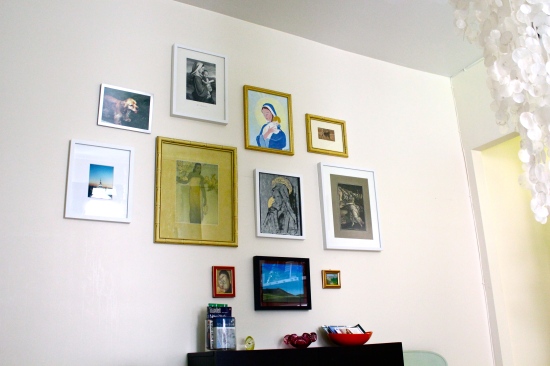 Gallery wall in my living room. One of the first projects I tackled after getting laid off.

In the meantime I went to the Apple Store and they straightened out my Time Capsule situation. It turns out I did everything right except for a very minor naming configuration which even had the Apple guy perplexed for some time. (Take that my tough love friend!) I also learned that this was not the answer to my problems like I had thought. The Time Capsule is used primarily for backing up your work, not for archiving photos exactly—which is not to say it’s not also great to have. So I wound up going to Mike’s Tech Shop (much nicer and more personable than Tekserve) and having them upgrade my memory and ram for a few hundred dollars—which pretty much makes my old Macbook Pro run like new and gives me two times the storage capacity of what I had before. I also went out and got an iPad mini with keyboard that I can easily take with me around the city everyday instead of hauling my brick of a computer everywhere.

Investments? Yes, but so worth it. I’m still on a bit of a learning curve with the iPad and getting my images synched and beautified, but so far it’s changed the way I travel and work. I can type anywhere now with minimal effort. I’m also looking for a rack to hang my bike so it won’t be so in my face. But I’ve ridden it more now than I have in the past two years. Maybe I’ll even go out and get a basket for it so I can make trips to the farmer’s market, huh? How ya like me now??

This all reminds me of how I’ve often heard of people who move from the city into a proper house that has multiple rooms and storage and they say, “How am I ever going to fill it?” But sure enough, a few years down the road it’s filled to the brim with “stuff.” Or when you get a raise and think, “Now I’ll finally have enough money!” Only to find that you buy more “stuff” and your expenses grow until you are back to feeling broke again.

In my case I’m accumulating the “stuff” before I have the space for it. But I’m working harder and I’m getting more crafty at making space for these things because for once, it’s “stuff” I really treasure. And like Debra said, I am growing and I have this overall feeling of abundance—as corny as that sounds (and I’m not just talking about my ass). In the months since I’ve lost my job I feel like I’ve upgraded the memory and ram of my life, and have made space for things that matter to me.

It took me about a full month and a half after I lost my job just to make changes in my apartment that were needed, or simply that I’d been meaning to make for years. I had cashed in a bunch of employee recognition “points” right before I left work that I didn’t think amounted to much—you know, key chains and cheap watches. But over the years of accumulating these points, I was able to get a shitload of awesome appliances and gadgets for the kitchen—a slow cooker, hand-held blender, a baking set and mixing bowls… And guess what I’ve been doing? Cooking up a damn storm is what! To make room for that “stuff” of course—I had to rearrange the kitchen. And while I was at it, I did the living room and cleaned out the closets. I got frames and created a gallery wall of pictures I’d been meaning to put up forever. I purchased a file cabinet and arranged all the bills and personal stuff I had been storing at work.

These were the first things I did before I could relax and allow myself to settle into unemployment for a bit. I rearranged, made room, and got rid of things that no longer served me. And in a way, it’s been happening naturally with the people in my life. I’m creating stronger bonds with positive people who I value and cherish and the “others”—who I may have connected with at a not-so-bright spot in my life—are slowly falling off.

Of course I have a long way to go and I’m not even really sure of the destination. But I’m as busy or busier now than when I was working, the difference is I’m busy doing the things I love. Will it last forever? Probably not. But in the meantime I am enjoying the ride and learning to just allow the universe to move in and take up the space it needs.

Hello friends and strangers. I'm Grace. I am a writer, an editor, a 2-cent-giver. I take pictures. I live to eat and try new things. I write about my adventures in New York City, plus whatever else is swirling around in my head and heart.

You think life is hard? Try being awesome.